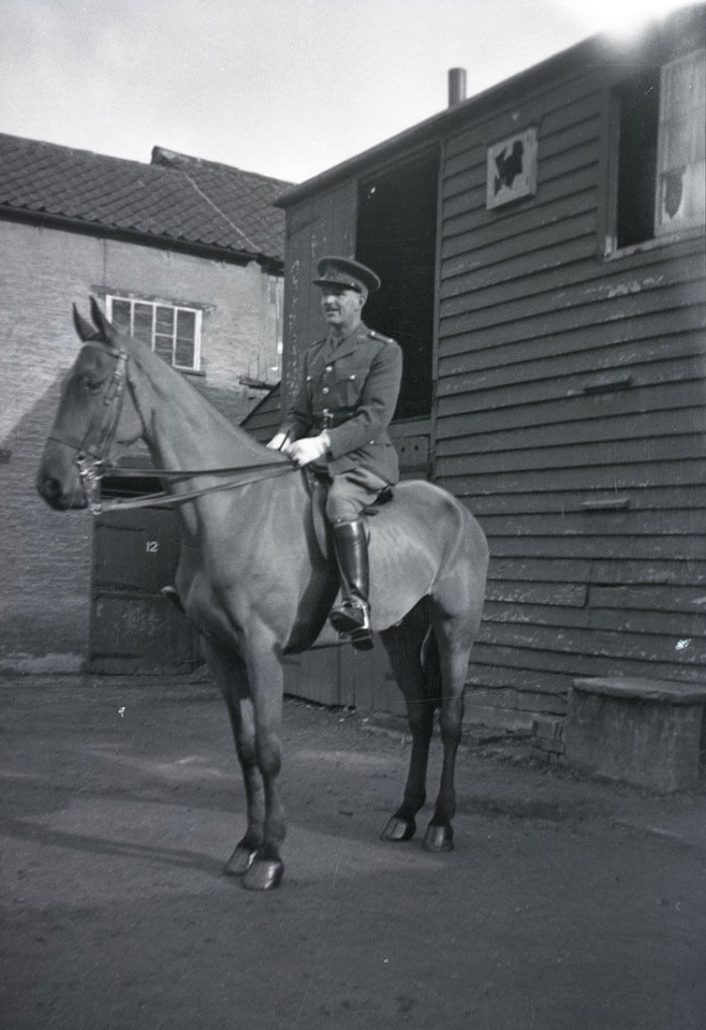 John left Crete in the summer of 1939 for England and was in Cambridge when war was declared between Britain and Germany.

By the end of 1939 he had been recruited by MI(R) [Military Intelligence (Research)], a section of the War Office that was later to be amalgamated into SOE (Special Operations Executive).  John was, in fact, one of a small group of British Classical scholars whose superior knowledge of the landscape and people of Greece was tapped during the course of the war by military intelligence.  After a Cavalry training course at Weedon and a brief course in covert operations, John was sent in June 1940 to Crete under the cover of British Vice-consul for the island.

John’s assignment was to organise resistance in the island in the event of an invasion.  He went straight to the white-haired Καπετάνιοι, whom he knew would be willing once more to seize their weapons and fight from their mountain strongholds.  The three main mountain ranges of Crete (Lasithi, Ida and the White Mountains) were his starting points. His contacts all over the island made it easy for him to build a network of resistance fighters and he established Antonios Grigorakis (known as Satanas), Petrakogiorgis and Manolis Bandouvas, who between them had influence with the largest number of people on the island, as his chief Καπετάνιοι.  These three men and their bands came to be known among the British and even the German forces as “Pendlebury’s Thugs”.  John’s British Lieutenants, sent to him by SOE Cairo, were Lt. Terence Bruce-Mitford and Lt. Jack Hamson.  Like John, Bruce-Mitford was a classicist, lecturing in Classics at the University of St. Andrews.  The two were dispatched by John to the mountains to help his three chief Kαπετάνιοι organize forces.

When Italy invaded Greece in October 1940, John abandoned his disguise and emerged in uniform as Captain John Pendlebury.  He sent a telegram to his wife saying, “Greece behaving grandly.  Very proud of Crete.  Reverted to my proper rank.”  John travelled all over the island, often to the point of exhaustion, setting up observation points and networks to pass information about the movement of all enemy ships and aeroplanes.  John tried hard to get weapons for his men, for he knew that the men would fight in any way and with whatever came to hand, and he wanted them to stand a chance.  Weapons, however, were scarce and at the time were being channelled mainly for use in Albania so his pleas for arms went essentially unfulfilled.

On May 20th 1941, the invasion of Crete began.  Thousands of German parachutists fell in waves on all the major cities of Crete, beginning early in the morning and lasting until early evening.  John was in Herakleion at the time, and was desperate to get to his men in the hills.  Satanas was with him and they decided to split up and try to get to Krousonas, where Satanas’ men were.  Satanas went via Knossos, while John tried to leave from the Chania Gate.  He started off by car, and then headed on by foot.  The details have become swamped in myth, but what seems to have occurred is that he became involved in a shoot-out with German paratroopers who had landed to the west of the town.  John was badly wounded and subsequently captured.  He was taken to a nearby house in Kaminia where his wounds were dressed by two women –Aristeia Drosoulakis and her sister Theonymphe Manousakis.  The women were taken to a prison camp in Tsalikaki the following day (May 22nd).  They learned only later that, after they were arrested, John was visited by a group of German soldiers who took him outside the house and questioned him about the location of the British forces.  When John refused to answer their questions they propped him up against the wall and shot him.  His body was found outside the house and buried nearby along the roadside by Aristeia and Theonymphe after their release from the prison camp twelve days later.  The Germans returned shortly and uncovered the body to ensure that it was indeed John.  They brought with them Dr. Kasapis, one of the friends John had made in Crete on his first visit in 1928, to make the identification.  Dr. Kasapis ascertained that is was John and his body was re-buried.  The grave, however, became such a source of inspiration to passers-by that the Germans moved it.  His remains, after undergoing several other moves, now rest in the British Military Cemetery at Souda.

Though John, in the end, was not able to lead his “Hill men” in the fight, it is a tribute to him and to them that they formed the backbone of the resistance in Crete against the Germans.