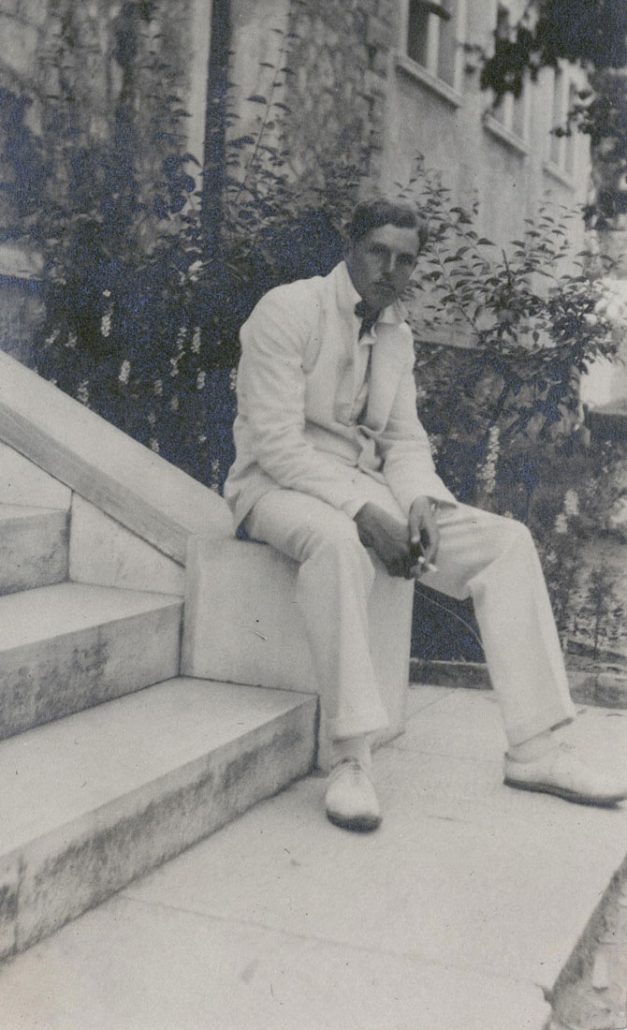 John Pendlebury, sitting on the front steps outside the British School at Athens [c. 1920s-1930s]

Greece and the BSA

When John returned to Greece in 1927, it was as a student of Pembroke College, Cambridge and the recipient of the Cambridge Studentship to the British School at Athens. Although daunted by the BSA residents at first, once he settled in he began to organise walking trips around the country with his fellow British School students. The walks would often last from dawn to long past nightfall.

Aside from satisfying their thirst and curiosity for the ancient and modern landscape, these walks had an additional purpose for John; he was collecting information from local museums for a catalogue that he was compiling of Egyptian objects found on Greek sites.  John always kept extremely detailed and precise notes on these trips recording the places they visited, starting and end points, distances and times, prices paid for food and other necessities, and the odd note or two on good kapheneia they had found or towns with exceptionally good wine.

One of the fellow BSA students, Miss Hilda White, became a regular companion on the walks.  Although small and slight, Hilda managed to keep pace with John – not only physically but also in her curiosity and thirst for knowledge about Greece both ancient and modern.  It was not long before John had fallen in love with her and within a year the two were married in England.  Typically, though, they spent their honeymoon on a walking expedition from Mycenae to Xylokastro on the Gulf of Corinth.

In February 1928, John visited Crete for the first time, accompanied by Hilda, Pierson Dixon and a small group of other students from the BSA.  Their first journey was to the east of the island, which was to remain John’s favourite part of Crete.  As they walked, “There fell in with us an old Cretan gentleman in all the glory of his native dress, his headcloth, his slashed waistcoat, a shot-silk sash round his narrow waist, his great baggy blue breeches and his high polished boots.  I know of no sight finer than a well-dressed Cretan peasant, and with the dress goes a swing and a lightness of foot which always sets me thinking of the slim athletes of Minoan days.”

After walking along the north coast, they headed inland towards the Lasithi plain.  As they reached the pass, they were enveloped in mist and then a blizzard.  Their first view of the plain was under a blanket of snow dotted with the pink blossom of almond trees.  They made their way across to Psychro to visit the Diktaean Cave, spending the night with a local doctor, Doctor Kasapis, who lived in the village.  In later years when John was working in Lasithi, he and Kasapis became firm friends, united by their passion and talent for telling funny stories late into the night.  Later still, it was Kasapis whom the Germans would force to identify John’s body.

Upon his return from Crete, John joined his first archaeological excavation in Macedonia.   The work thrilled him even though the site yielded little in terms of “exciting” finds and he wrote to his father about the excitement of an archaeological dig. He also wrote of its frustrations, but it was clear to him from that point onward that he did not want an academic life spent only teaching and in the library – he wanted to dig.

Although he had enjoyed the work in northern Greece, John was soon back in Crete and he approached Sir Arthur Evans about the possibility of conducting excavations on the island.  Evans suggested that he might consider excavating at Komo, and John leapt at the chance.  The harbour site was on the south coast and would certainly, John thought, have been connected with the Minoan trade with Egypt.  But John was soon disappointed when Evans, clearly having inspired himself too, implied that he would dig Komo himself.  The following year, however, the decline in Duncan Mackenzie’s health left open the position of Knossos Curator.  John was the obvious choice to replace him and, in March of 1930, he and Hilda moved into the Villa Ariadne at Knossos to undertake his new position.  The affair with Crete had begun.

The Curatorship brought many new challenges and changes for John, who at the time was only twenty-five years old.  He would now bear the responsibility for overseeing and running excavations at the site during the field season and for the maintenance of the site, its buildings and facilities.  John’s tenure, however, brought an equal number of changes to Knossos.

To start, John felt that the library at Knossos lacked appropriate research materials on Cretan studies.  He appealed to Sir Arthur Evans for assistance and began to augment the collection – in fact, Pendlebury’s and Evans’s books still form the core collection of the British School Knossos Library.    What was far more daunting, however, was the pottery collected from the previous thirty years of excavation at Knossos.  The idea of creating a “reference museum” of the site’s pottery was first proposed by Evans in 1905.  All the pottery that came out of the trenches was stored within the roofed Throne Room Complex and, as the collection grew, in other roofed areas of the Palace as well.  This “reference museum” came to be known officially as the Stratigraphical Museum.  By 1931 the collection of the Stratigraphical Museum had become substantial.  Potsherds and minor small finds needed to be re-bagged and properly organized for the readily available access that Evans had envisioned.  John, with the assistance of Hilda, Edith Eccles and Mercy Money-Coutts, not only compiled an index for the approximately 2,000 boxes of pottery, but dated the contents of each lot and, for the first time, plotted each box’s find spot on a plan of the Palace and neighboring buildings.   The resulting publication, A Guide to the Stratigraphical Museum in the Palace at Knossos (1930-31) is an indispensable tool for archaeologists who re-study Evans’s excavations in the Knossos valley and, thanks to John and his crew, clearly presents the stratigraphic evidence for the dating of the different sections of the Palace and their strata.

There was, of course, new archaeological work to be done as well.  Although Evans remained the director of the site, it was up to John to see that excavations ran smoothly, workmen got paid, and everything was recorded properly in the excavation notebooks.  In 1930, he excavated a group of Middle Minoan Ia houses located under the deep pits (koulouras) in the West Court of the Palace and a group of Old Palace period houses further to the north.

In 1934 the Curatorship of Knossos was turned into a full-time position and John resigned in order to be able to continue excavation work in Egypt and his explorations in Crete.  Without responsibilities at Knossos, John was free to spend much more time travelling around the island gathering information for his book The Archaeology of Crete: an Introduction (eventually published in 1939).  During these travels, John often stopped at Trapeza Cave near the village of Tzermiadha, in Lasithi.  The cave had been discovered by Sir Arthur Evans in 1896 but little work had been done on it since that time.  John’s extensive experience with the pottery from the Stratigraphical Museum at Knossos led him to date the pottery at Trapeza to the Early Bronze Age and suggested that activity at the cave predated even that of the Diktaean Cave on the other side of the Lasithi plain.

He returned in 1936 with Hilda and Mercy Money-Coutts for further excavations.  These excavations supported John’s initial theories and showed that the cave had been inhabited from the Neolithic period to Early Minoan I, after which it became a place of burial. It was clear from what John saw at Trapeza that there was a great deal more to be learnt from the Lasithi plain, so he decided to return the following year to carry out a series of exploratory excavations around the village of Tzermiadha.  Along with Mercy Money-Coutts and Marion Pascoe, he investigated several other caves, a group of tombs called Τα μνήματα and a site high above the Lasithi plain, known as Karphi.  The site of Karphi, located on an outcrop of rock overlooking the north coast of Crete over 4000 feet below, had been noted by John on one of his earlier trips, but had never been excavated.  Situated high in the mountains and commanding the route into the Lasithi plain, Karphi was founded as a refuge site in the period after the wave of destructions that swept through the major centres of power in Crete in the Late Bronze Age.  The combination of Minoan and Proto-Geometric influences in the pottery, and of Minoan and Achaean elements in the architecture, led John to the conclusion that this was a refuge from a Dorian invasion early in the 11th century BC.

By the time John returned to carry out a full excavation of the site in 1938 and 1939, the village of Tzermiadha welcomed him as one of their own.  “After dinner arrived five village elders …with a gallon of wine and a set speech on the benefits we had conferred on the district.  A pleasant evening was had by all.  It made one realise what the reception of a Proxeny or a Presbeia must have been like in Classical times.”  John could see echoes of the ancient Cretans in the Cretan people whom he knew.

John threw a large party near the end of the last season.  “On Saturday we had our annual ‘glendi’ – party – for the village, it being my name day (St John the Baptist).  It was the best we have had up to date.  I really felt the village father! – pretty near 1000 people and dancing from 9-3!  Yesterday (Sunday) we were invited to the breaking up of the school – with lots of recitations and prizes.  I’m giving one in the future for the best essay on the history of Crete and particularly Lasithi.” (PEN 7/6/6)

But already it was looking likely that there would be no other season.  As John wrote in his last report on Karphi, “In the uncertain shadow of war it is like looking into another age to recall the days of the dig, the torch-lit dances we gave the village and that last grand dance given to the workmen and to the fathers of the village on the windy saddle of Karphi itself.  The ground shook to the beat of the long, winding dances, and the red wine passed round the halls of the city as three thousand years ago in the wild days of the Iron Age Lords.”

Athens, the BSA and around Greece